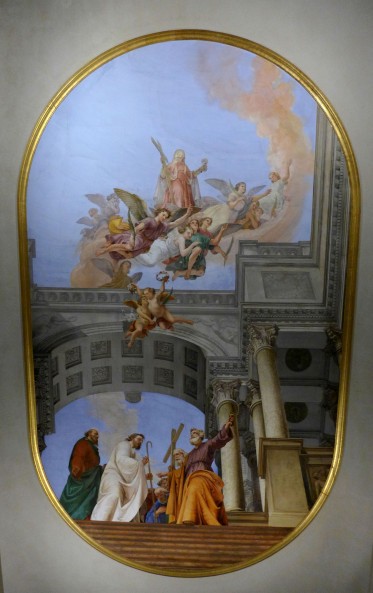 In Udine there is a little known museum called “Diocesan Museum and Galleries of Tiepolo”, yet it is a little gem for the ones that like to admire frescos.

The Palace, an eighteenth-century structure (1593 to 1751) was the residence of the Patriarchs of Aquileia today Archbishop. It is a bit unassuming as a building among the “palazzi” of Italy.

The collection includes about 700 works, mainly frescoes, including the eighteenth century by Giambattista Tiepolo, who decorated the ceiling of the grand staircase, the Gallery of the guests and the Red Room at the behest of the then Patriarch Dionisio Dolfin.

Tiepolo started by decorating the ceiling of the grand staircase. The fresco “Fall of the Rebel Angels” dates back to 1726 it is a great example of Baroque illusionism, surrounded by eight monochromes depicting episodes from Genesis.

The narrative includes biblical figures: Abraham, Isaac and Jacob (see images: The Binding of Isaac; Moses and Ten Commandments; San Peter arriving at the gates of Heaven). The middle panel houses the fresco “Rachel hides the idols” (not shown), a work full of suggestions in which you want to identify the portrait of Giambattista Tiepolo and perhaps even that of his son Giandomenico and his wife Cecilia.

Finally Tiepolo painted the ceiling of the room red representing “The Judgment of Solomon” (1729) proving its technical skills and perspective, depicting colorful court of the king and the dramatic event scene threatened by minion.

An entire floor is dedicated to wooden sculptures, arranged in chronological order from the twelfth to the eighteenth century, which is the highest artistic expression of sacred art in Friuli.

Of great artistic value is the library of the Patriarch Delfino, the first public library in Udine, which houses precious volumes and rare first editions.

From the Library it is possible to view a private staircase, with a frescoed ceiling. I cannot go by without taking a picture of it.

One thought on “Tiepolo Frescoes”