December and January are not the best months for big hikes, but there are opportunities for short ones, while preparing for big tours on the Alps and Dolomites, when the season permits.

I took a small hike a couple of weeks ago. It was an unplanned hike of a couple of hours on the hills around the town of Vicenza. There are always things to see; because in Italy villas and palazzos are everywhere. Some are still inhabited, some—unfortunately—are in disrepair or in need of funds.

While hiking we passed by a big property, well protected by walls and gates, so it was not possible to see much of the palazzo. Just the coat of arms and the names of the family(ies) owning the property. These are very well known Italian families that made history.

The Bissari were a prominent family in Vicenza between the thirteenth and nineteenth centuries. They ruled several fiefdoms and estates, especially the feud Fabrica Costa, which is now Costabissara (the name of the town where I was hiking)

The Sforza family was the noble family who ruled the Duchy of Milan from 1450 to 1535. The family name comes from the nickname of its founder, Muzio Attendolo (Cotignola, 1369 – near Ravenna, 1424), a mercenary to the Angevin kings of Naples services, he was called Sforza (Forte = Strong) for his prowess. The first Duke of Milan acquired the ducal title thanks to his marriage to Bianca Maria Visconti.  Ludovico Maria Sforza (also known as Ludovico il Moro; 27 July 1452 to 27 May 1508), was Duke of Milan from 1494 until 1499. He was the famous patron of Leonardo da Vinci, and presided over the final and most productive stages of the Milanese Renaissance. He is probably best known as the man who commissioned The Last Supper.

The Colleoni are an ancient noble family, originally from Bergamo. Paolo Colleoni in 1404 conquered the castle of Trezzo and held it until it was assassinated. His son was the most famous member of the family, the leader Bartolomeo Colleoni, Captain General of the Republic of Venice. Andrea Verrocchio built him an equestrian statue in Venice, which is considered one of the most important sculptures of Italian Renaissance.

Interestingly: In 1475 the Condottiero Colleoni [Condottieri were the leaders of the professional military free companies (or mercenaries) contracted by the Italian city-states and the Papacy from the late Middle Ages and throughout the Renaissance]; Colleoni a former Captain General of the Republic of Venice, died and by his will left a substantial part of his fortune to the Republlic of Venice on condition that a statue of himself be commissioned and set-up in Venice most famous Piazza San Marco. In 1479 the Republic announced it would accept the legacy, but a “condottiero/mercenary” right there in Piazza San Marco was too much to ask!

Therefore the statue was placed in an open space in Campo San Giovanni and Paolo, not “prime location” but still a wonderful location.

Back to my trail after some history.  We passed by a delightful small Orthodox Church as well. The hike took about two hours. Along the way it is possible to admire the panorama of the hills, and the town of Vicenza in the background.

The Most Famous Supper 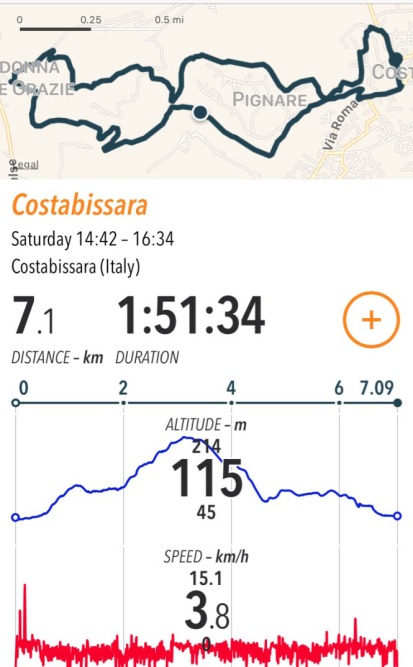 2 thoughts on “Hiking in Winter”