In Italy there is a close relationship between food and literature.

If not the book, the movie is a must see.

There is another version of Timballo though, perhaps even more spectacular than the one with the crust, and surely as tasty.

It is made with melanzane (eggplants) the long and slim ones. Short pasta, tomato sauce, cheese, ideally scamorza, but I think that mozzarella can be as good, especially if not very “watery.” Finally some grated parmesan.

Again it can be assembled ahead of time, and then in the oven for about 1/2 hour at 350F.

I started with a simple 700 gr. tomato sauce, enriched with basil too.

The pasta (about 1/2 kg for 4 people) can be cooked ahead of time and kept very much “al dente” or about 4 minutes less than the cooking time recommended in the box.

The eggplants should be cut lengthwise, and let them rest with some salt for an hour or so to drain their bitter juices.

Four (4), eggplants should be enough, but it depends from their size, I made a visual estimate; they should line the entire pan that will be going in the oven.

Then fry them adding a little oil at a time. Eggplants tend to absorb a lot of oil, so I use always a grilling pan and add a little oil as I go. Set them aside to cool.

I also fry one, cut into small cubes that I will add to the sauce and pasta later.

While the eggplant cools, quickly sautee the pasta with the tomato sauce, add the chopped cheese of your choice, the eggplant in cubes, and some parmesan. Stir well to make sure that all ingredients are nicely mixed up. 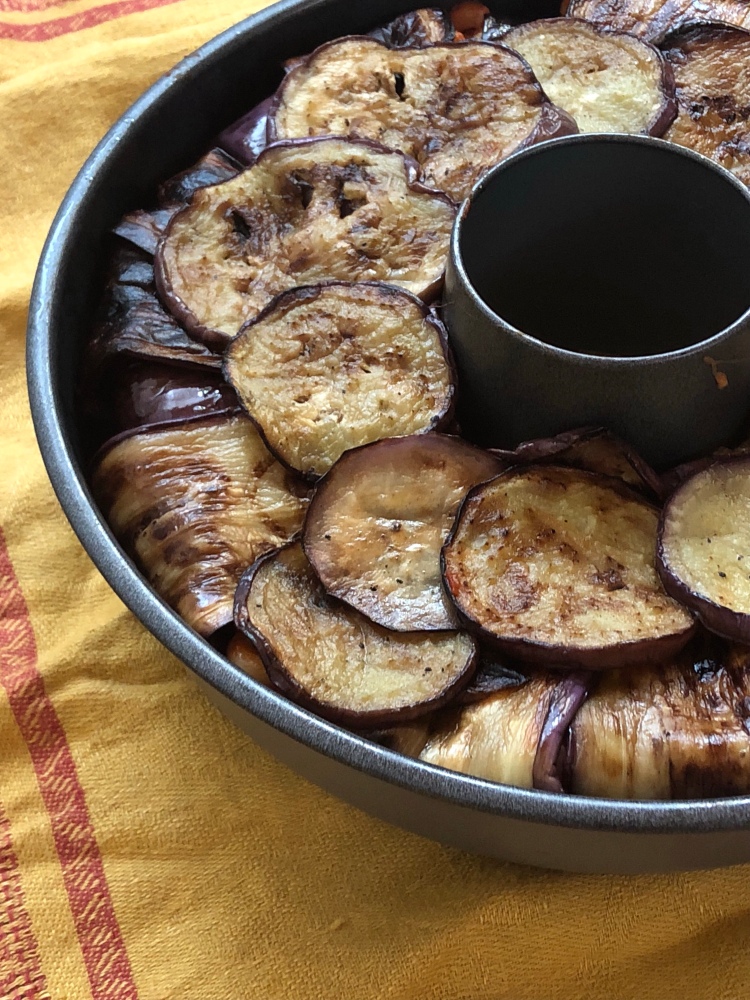 Line the pan with the fried–and now cooled–eggplants, making sure to cover all the surface. Pour the mixed past inside and fold the eggplants on top (or add some if you need).

Put in the oven for about 30 minutes, then let it rest for a moment. And serve in a nice serving plate for effect. It keeps the shape quite nicely!

Below a little story on the book. But I want to just say that today we are all overstuffed with food. I can’t really think of being able to digest “Pasta and the crust, chicken livers, hard boiled eggs, ham, chicken, and truffles…”

The novel Il Gattopardo was published in 1958 and tells the story of the significant events of the prince of Salina and his family in the years of the unity of Italy, in a Sicily reticent to change. As every year, for generations, the Salina moved with the beautiful season in the sleeping palace of Donnafugata. As every year, on the occasion of their arrival, the house reopened, organized by expert hands a solemn supper to welcome the friends of all time and to reaffirm the unchanged power of the prince. That evening Angelica also came into the great hall with her Italian beauty, with her unrepentant but very disturbing physicality. The prince’s nephew, Tancredi, falls in love with her; the prince observes her enraptured by her spontaneity and her beauty. Start the evening, the candles light up the sumptuous table, enter the timbale of macaroni that the author so masterfully describes:

“The burnished gold of the wrapper, the fragrance of sugar and cinnamon that emanated from it, was nothing but a prelude to the sensation of delight that came from inside when the knife broke the crust: first it burst a smoke full of aromas and then we saw the chicken livers, the hard eggs, the fillets of ham, chicken and truffles in the unctuous mass, very hot with short macaroni, to which the meat extract gave a precious chamois color. “

One thought on “The Other Timballo”