It’s fresh news these days that there will be a new entry tax (a ticket practically) to gain entry in Venice. A so-called “landing fee“, essentially an entry ticket between 2.5€ and 5€ already enabled for some smaller Italian islands such as the Aeolian Islands and Elba for those Tourists–with any carrier–arriving in Venice for tourism and not staying overnight.

These measures are meant to limit the tourist flows which are–in some days–impossible to handle. In addition to the “hit and run” tourists, also the passengers of the large cruise ships, must pay that fee. The tax measure, is meant to “have a selective effect and moderate the access of the so-called large ships to the lagoon area“.

Personally I think that Venice should be visited with a plan in mind. Have an itinerary, or a selection of places/churches/museums to see. Otherwise in some days it can be just a nightmare.

One of these is in fact the Palazzo Ducale. It is sometimes overlooked because the exterior is nevertheless a marvel to look at. The line to gain entry is also a little long, but then the interior is rather grand, and it looks less crowded. The way to go is by having the online tickets already. 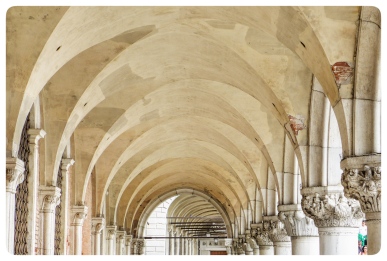 This splendid palazzo was the seat of government, the Palace of Justice, and home to the Doge, since the very early days, and for the centuries to come the only building entitled to be called “Palazzo.” All others, no matter how beautiful and richly decorated were mere “Ca’,” short for Casa, meaning “home” (see Ca’ Foscari, Ca’ d’Oro, and so on).

Entrance to the Palazzo Ducale is from the colonnade facing the sea, which is supposed to be the real façade. Venice was built to be seen from the sea!

While inside the Palazzo Ducale you can have quite a few photo op! 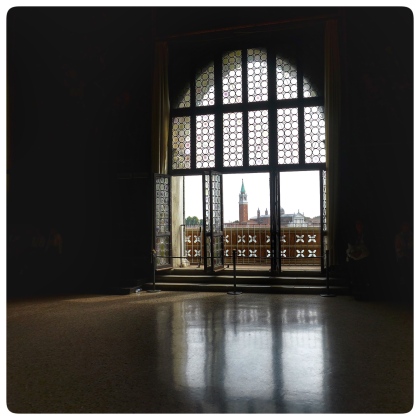 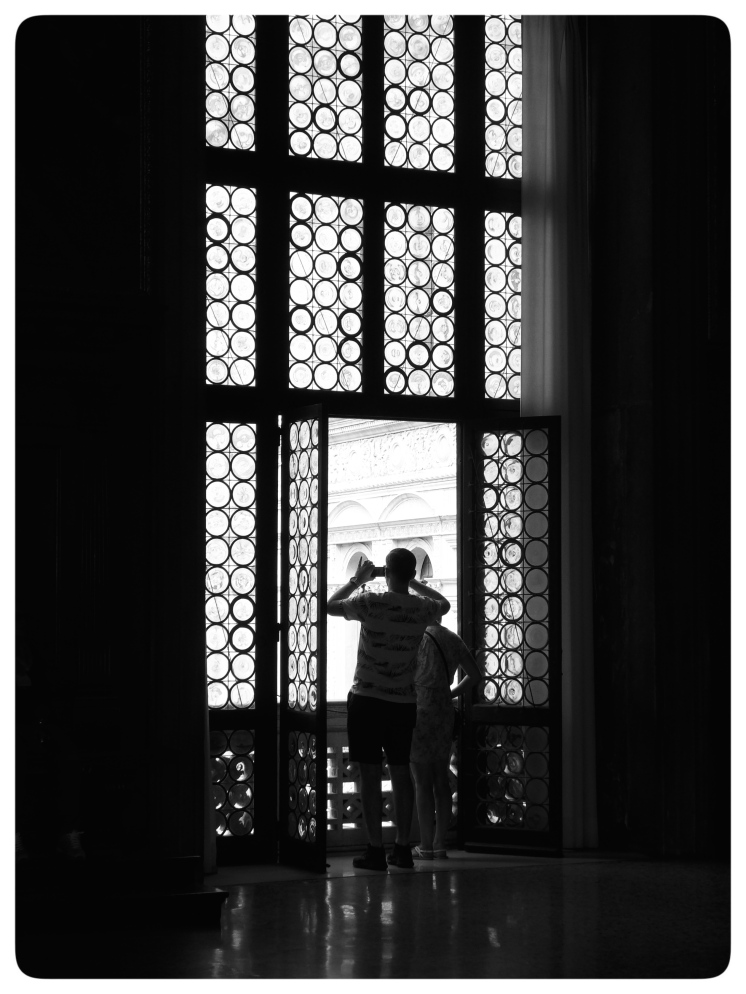 The colonnade has a series of intricate carved Gothic capitals; each one is different from the other, and they all hold a significance. The ones pictured are the first 6; but the most interesting two are at the corner with a carving depicting Adam and Eve with the serpent.

The very last one next to the bridge “Ponte della Paglia” (from which one can see the Bridge of sights), has a fantastic depiction of the “Drunkness of Noah.” 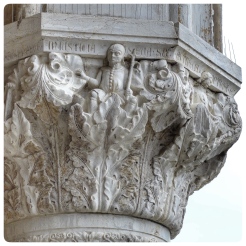 Inside we are presented with a magnificent courtyard. Here you can see the famous “Giants’ Staircase.” A grand staircase used for ceremonial purposes. Once, it was on top of that staircase that the Doge would be crowned. The two giants are Mars and Neptune (you can’t miss him from a city that owes its riches to the sea!) 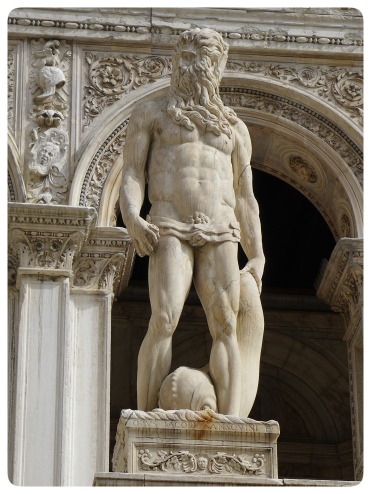 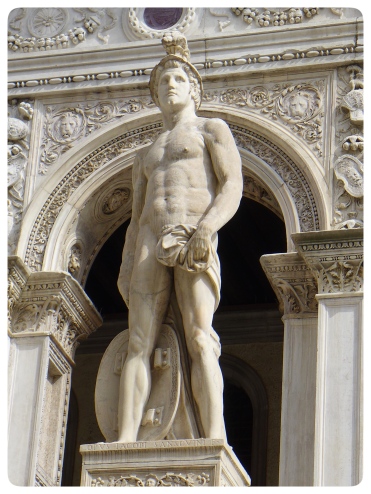 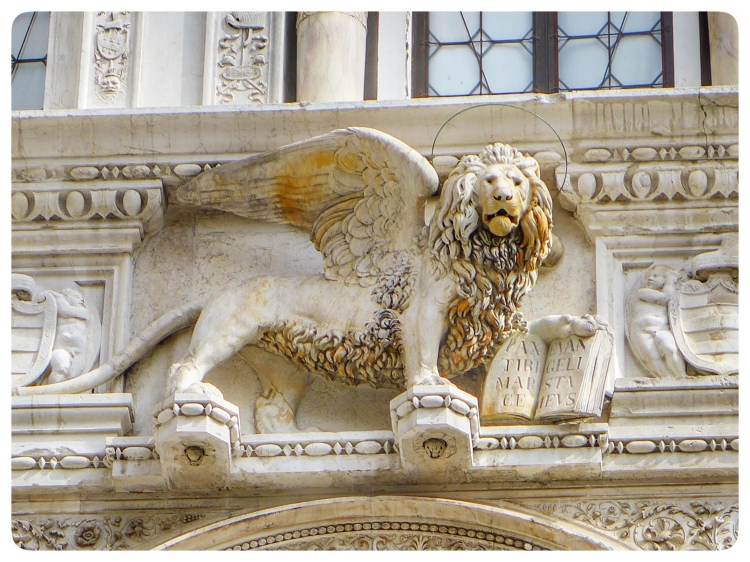 You can’t miss the Winged Lion of St. Mark while in Venice.  See Tales of Tails for a story about the Leone Marciano.

It takes time! You will be going thru a series of richly decorated chambers and halls.

Scala d’Oro (Golden Staircase; 1538–1559 by Sansovino) leads you to the State Apartments, or the Doge’s Quarters. These were built after a fire in 1483 (Venice has a sad story of fires, even in rather recent times); and looted by Napoleon a few centuries later. 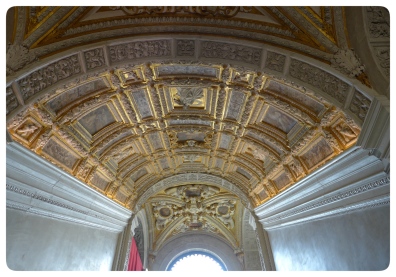 From there you will find the Sala delle Quattro Porte (Four Doors Hall) and to the Sala del Senato (The Senate Hall).

Next the Sala del Consiglio dei Dieci (The 10 Councils Hall), or the meeting room of the awesomely powerful Councils of the Ten. This Council was founded to investigate and prosecute crimes concerning the security of State (practically the FBI of ancient times). 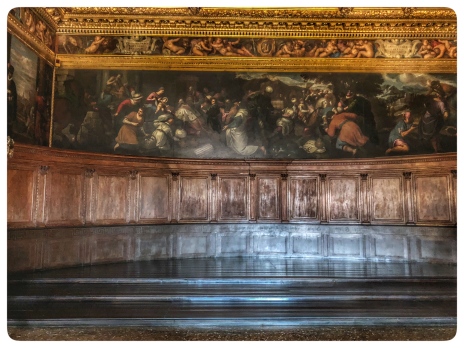 Sala del Maggior Consiglio (Major Council Hall); this is quite something, with a big Tintoretto fresco on one of the walls, and a breathtaking ceiling (all ceilings are quite impressive. At the end of the tour you may have a sore neck!). 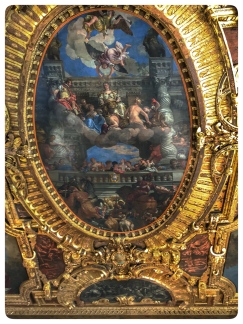 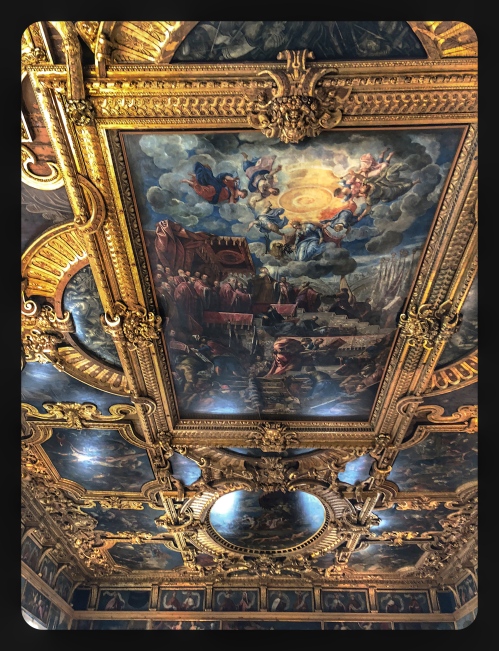 From this Hall a series of passageways and stairways leads to the Bridge of Sights, which links the palace to what were known as the new prisons. They can be visited if you so wish, there is even a “secret itinerary” where the Casanova’s cell will be shown. Although these prisons are hardly inviting, it must be noted that prisoners here were far more comfortable than the criminals that were left to pester on the dungeons at ground level.

The last rooms are the offices of the “Avogaria” (the Lawyers or State Prosecutors), where they prepared the trials. 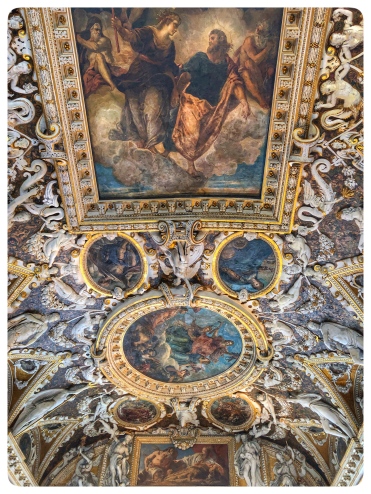 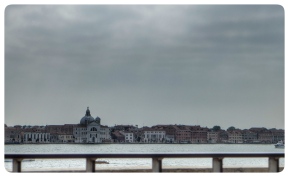 To exit the Palazzo Ducale you’ll go via the “Arco Foscari” and “Porta della Carta” (The Gate of the Paper; so called either because paper statements were placed at this door, or because of the nearby archives). This is the gate that is squeezed between the side of the Basilica, and the corner of Palazzo Ducale.

A lot can be said about Venice, I wrote about it but I feel it is always too little, but stay tuned, more will come.