Well yes, the artichoke can be intimidating, and it requires a little dextrity in both preparing it and eating. But the rewards are great. 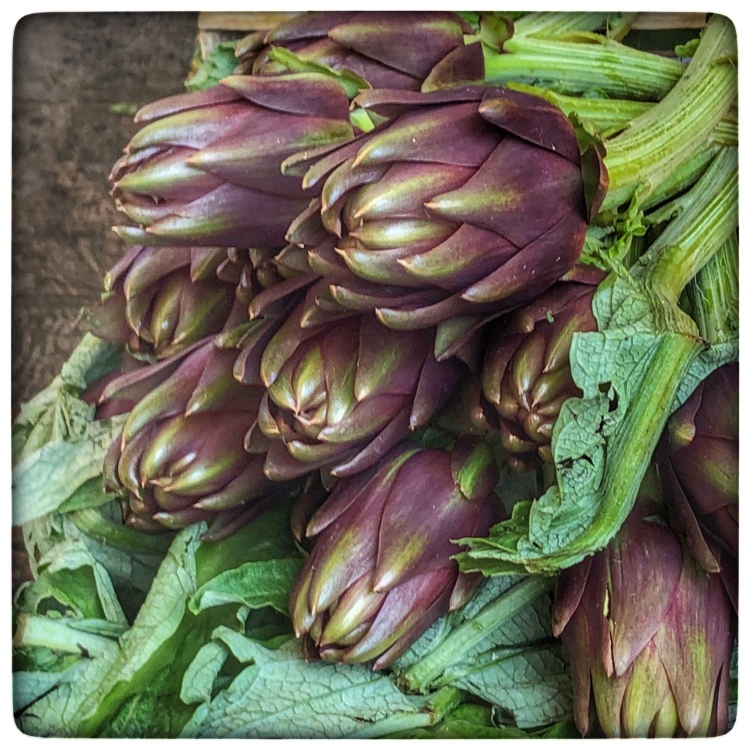 I was always a little perplexed that in the East Coast artichokes were so little known, while in California, if you travel from Monterey down south there are fields and fields of artichokes, in fact, in the United States of America the largest production of artichokes is in California, and within California the county of Monterey concentrates more than 80% of the total.

They are not so scaring after all. They have very few calories, are very tasty and have many fibers, as well as a good amount of calcium, phosphorus, magnesium, iron and potassium. They are endowed with appetite regulating properties, have a diuretic effect and are recommended to solve problems of cholesterol, diabetes, hypertension, overweight and cellulite.

They are also very appreciated for the tonic and detoxifying characteristics, for the ability to stimulate the liver, calm the cough and contribute to the purification of the blood, fortify the heart, dissolve the stones. The artichokes contain a lot of iron thanks to two substances: the coloretine and the cynarine, present in maximum concentration during the formation of the flower head, which is then the part of the plant that is used in the kitchen. 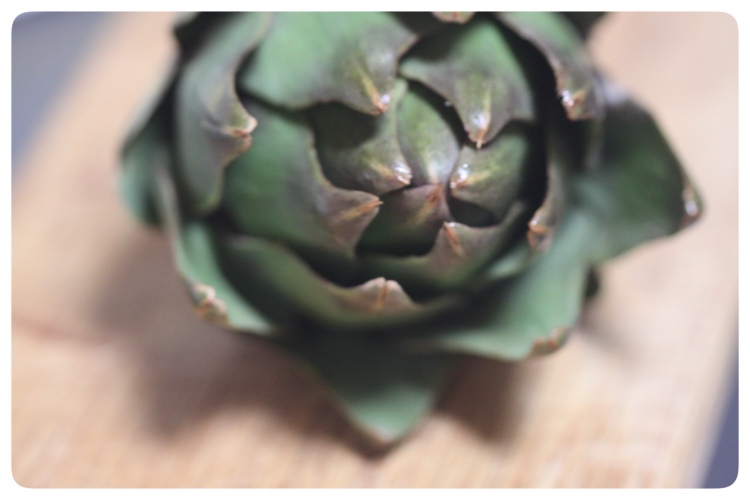 Italy holds the world record in the production of this vegetable (equal to about 30%). The areas of greatest production are Sicily (Piana di Gela and Piana di Catania), Sardinia (Ittiri and Samatzai) and Puglia.

Artichokes are big and bulky. If bought for a dinner one must calculate one or two per person, so there is a certain “volume.” At home they can last a couple of days in a vase, just like a bouquet of roses!

When the moment of cooking comes, my first advice is to wear plastic gloves, they tend to stain the fingers a bit (though you can remove it with lemon juice); all the outer leaves need to be removed, then with a sharp knife, and/or a potato peeler to peel the stems—wich also need to be shortned to about 2 inches.

How to cook it

It can be steamed, fried, or “Roman Style.” If you travel to Rome during January-April you’ll find many restaurants that will have artichokes on the menu.

The best are the small young and tender at the end-December/beginning January, later on they become bigger and all the outer leaves need to be discarded and only the “heart” is good to be eaten.

In Italy we find them ready to be cooked, maintained in water and lemon, and we can choose between the “whole” or the “hearts” only. 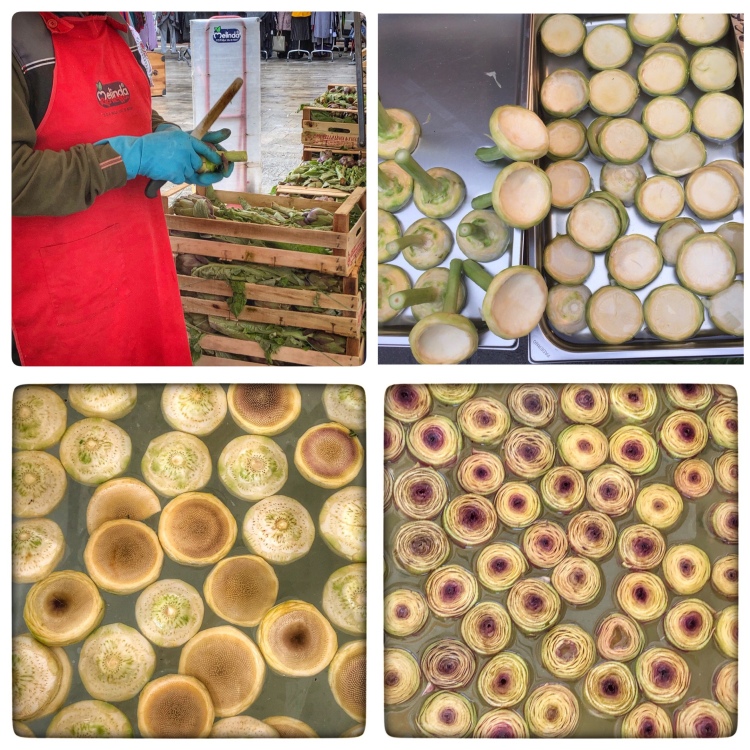 Remove the hardest outer leaves from the artichokes, cut the stems leaving only half a centimeter, crumble them with the lemon cut in half if you cook them immediately, otherwise put them to soak in water with lemon juice. Peel the stalks of artichokes to remove the most fibrous part.

Chop the garlic cloves, parsley, and five to six mint leaves, seasoned with oil, salt and pepper. Enlarge the corolla of the artichokes and put a little bit of the mixture in the center. Then align them in a saucepan or in a pan with high sides, pour two glasses of water, sprinkle three to four tablespoons of oil, cover and cook for about 1/2 hour to 45 minutes. It easy to check if they are done by inserting a fork on the stems. 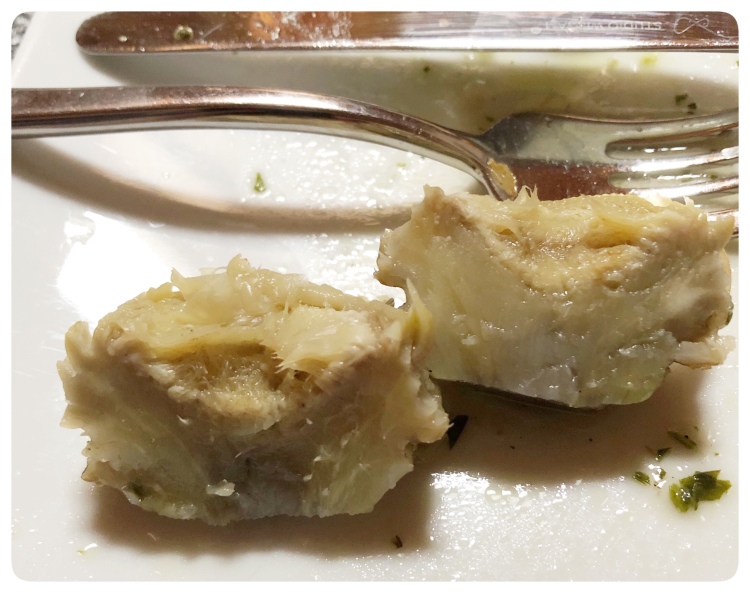 There are other recipes for the above, some include the use of anchovies. But I prefer them in a more simple way. 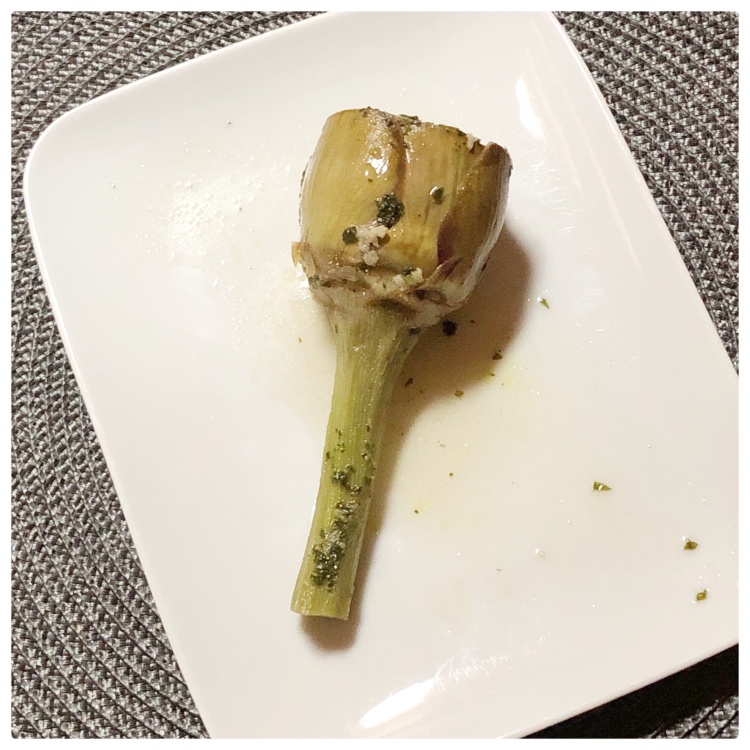 It is believed that Catherine De’ Medicis, after her marriage to Henry II of France, introduced artichokes to the French cuisine.

2 thoughts on “The Intimidating Artichoke”