In Milan seeing the Last Supper by Leonardo is a must. Regardless of the problems and discoloration, it remains a great masterpiece to look at and examine carefully.

Before entering the “Refectory,” where the fresco is located, it is worth a visit to the church of Santa Maria delle Grazie. 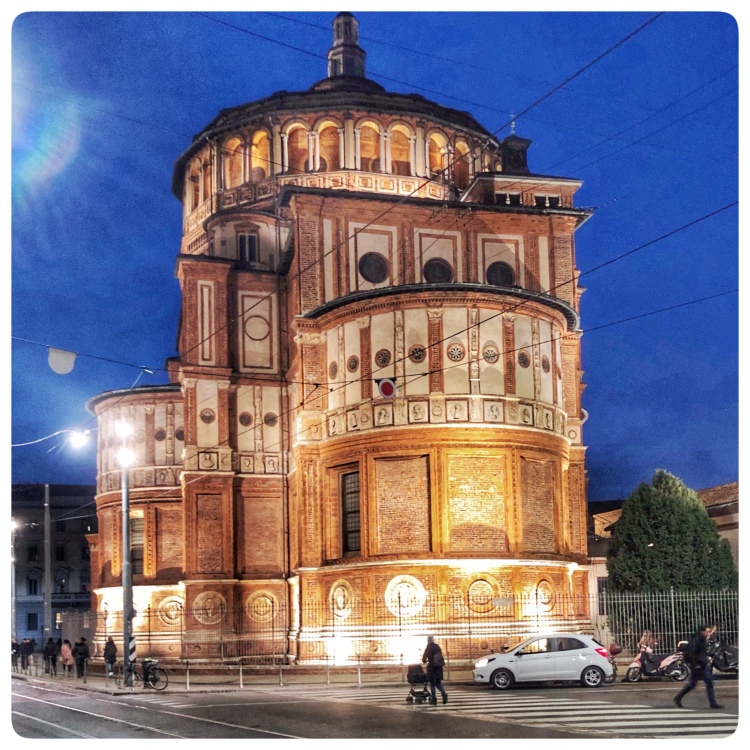 Duke Francesco Sforza (First of his name! 🙂 ) ruler of Milan and the founder of the Sforza dynasty ordered construction of a Dominican convent and a church at the site of a prior chapel. The construction of the church took decades. His son Duke Ludovico Sforza decided that the church serve as the Sforza family burial site. It seems that the design of the apse was by Donato Bramante, who at the time was in the service of the Sforza Duchy. True or not, I found the interior quite interesting. In 1543, the Titian altarpiece depicting the Christ receives the Crown of Thorns was installed in the Chapel of Holy Crown, located on the right of the nave. The painting, looted by French troops in 1797, it is now in the Louvre.

During World War II, on the night of 15 August 1943, an allied aerial bombardment hit the church and the convent. Much of the refectory was destroyed, but some walls survived, including the one that holds The Last Supper, which had been sand-bagged in order to protect it.

The Church is now restored and stands out nicely in Corso Magenta, among the city buildings. 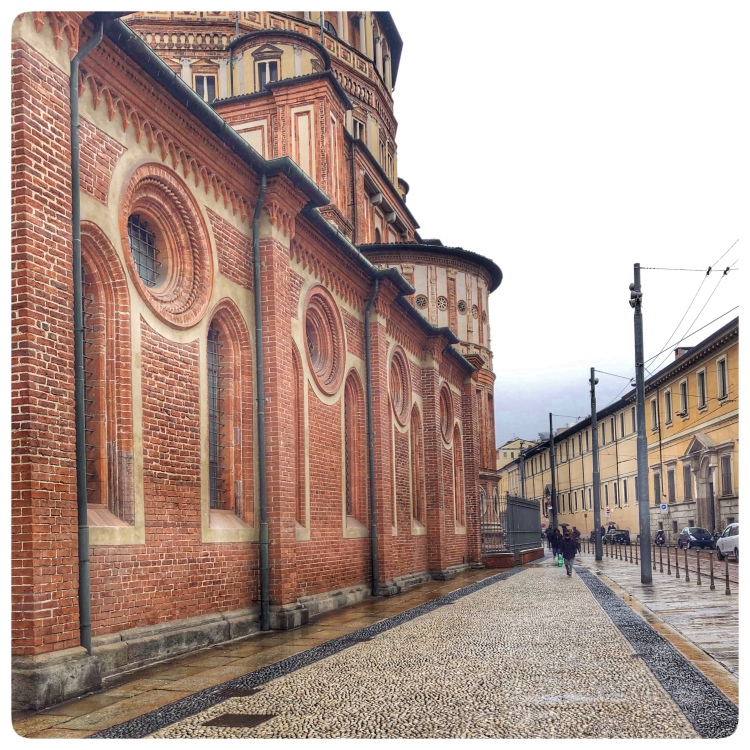 This is the fresco that everyone wants to see.

Leonardo Da Vinci started the fresco in about 1495–96, commissioned by his patron Ludovico Sforza. The painting represents the scene of the Last Supper of Jesus with his apostles, as it is told in the Gospel of John, 13:21.

After he had said this, Jesus was troubled in spirit and testified, “Very truly I tell you, one of you is going to betray me.”

His disciples stared at one another, at a loss to know which of them he meant. One of them, the disciple whom Jesus loved, was reclining next to him. Simon Peter motioned to this disciple and said, “Ask him which one he means.”

And Leonardo depicted the consternation that occurred among the Twelve Apostles when Jesus announced that one of them would betray him.

It is a huge painting 460 high and 880 cm wide made of greasy tempera (and perhaps with other oily binders) on plaster, an innovative technique compared to what was commonly used in frescos. Those who observed Leonardo working said that his behavior was more than bizarre. Some days he began to paint early in the morning and did not even lay his brush to eat, while, at other times, he walked around the city in search of faces that inspired him or spent several hours looking at his creation.

The work has suffered unfortunate trials and tribulations over the centuries; since painted on plaster, immediately the painting began to come off. Between the eighteenth and nineteenth centuries various attempts at restoration were made, unfortunately failed.

During the French occupation, Napoleon’s troops used the wall to practice shooting and in 1943 the bombings destroyed the roof of the hall, leaving the Last Supper, for several years, exposed to the weather.

After careful and intense restoration, Leonardo’s Last Supper has recovered part of its original splendor and today can be contemplated by the lucky tourists who can book the visit well in advance.

The Stories Around it

In Leonardo’s sketches, the apostles are clearly identified by their name but, nevertheless, there are figures that remain mysterious. For example the “female features” of the person [Saint John] who is on the right of Jesus, it is thought that he depicts Mary Magdalene rather than Saint John. Thanks to Dan Brown’s book and movie, the idea that it could be Mary Magdalene sitting next to Jesus was reinforced a lot!

On the opposite wall we can admire the Crucifixion by Giovanni Donato da Montorfano, to which Leonardo added figures of the Sforza family in tempera. (These figures have deteriorated in much the same way as has The Last Supper.)

A curiosity: after working for so long for this paiting, Leonardo did not get any compensation and did not even bother to request it!

In order to see this work it is mandatory to book the visit well in advance to the phone number +39 02 92 800 360. The tour takes 15 minutes for a maximum number of 30 people to avoid crowding. Therefore, the visit is carried out in complete comfort.

It is also possible (and recommended) to book online at the following link: 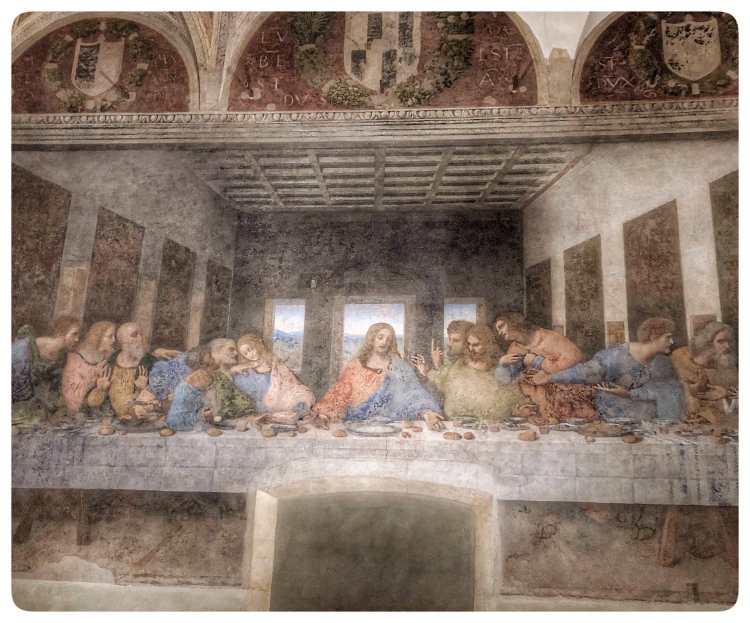 2 thoughts on “The Most Famous Supper”