Tiramisú (which means literally “Pick me up!”) was first created in Treviso. It all started with the “sbatudin“, a poor and energetic sweet made from egg yolk mounted with sugar, intended above all for children, the elderly, and convalescents. And I can testify to that, having grown up in that aerea, that is exactly what my mother gave me when she wanted to give me strength, or I was recovering from flu or something.

At the end of the 1960s, pastry chefs and restaurateurs from Treviso worked a really special dessert out of that “sbatudin.” The “Tiramesù‘, which was proposed for the first time in the restaurant Le Beccherie.

Tiramisú immediately became very popular, not only in the restaurants of Treviso and the Veneto region, but also beyond all Italy.

Tiramisú owes some inspiration to creamy spoon desserts, and for a popular 1960 desert called Zuppa Inglese (literally “English Soup,” with custard, chocolate cream and sponge cake, all layered. Very popular in my younger years, my grandmother must have liked it very much). The Tiramisú with liquor and abundant doses of chocolate appears, therefore, as the result of a distant Piedmontese influence. The use of mascarpone seems instead a loan from the Lombard gastronomy.

By itself it is basically a “coffee soup.” The ingredients are mascarpone, eggs, sugar, biscuits, coffee and cocoa powder. Egg yolks and sugar should be whipped, then add the mascarpone and the whipped egg whites. Soak the ladyfingers in the coffee and alternate with the layers of egg cream and mascarpone, dusting with cocoa at the end. Fundamental point, the cream, that must remain soft and abundant, without being completely absorbed by ladyfingers. As you can see, in the classic recipe neither liquors nor chocolate appear inside the layers. If you prefer to add some liqueur, the most suitable appears Marsala.

Over the years, much has been fantasized about the origins of this dessert. Ownership claims are coming from all over Italy!

Certainly, from the beginning to the present day Tiramisú has come a long way: today it is one of the great classics of our cuisine. And alternative versions abound: in addition to liquor and chocolate, those with sponge cake, with strawberries, ice cream, limoncello, yogurt … all revisited versions of an inimitable dessert.

Personally, I felt a little “mild” about the Tiramisú. Perhaps it is the richness of the mascarpone cream, or the raw eggs, or maybe because I had too many “sbatutin” as a child! The fact is that I do have my own version of Tiramisú where the eggs are actually cooked in Zabaglione cream (dessert made of whipped egg yolks, sugar, and Marsala wine), practically a thicker Eggnog! 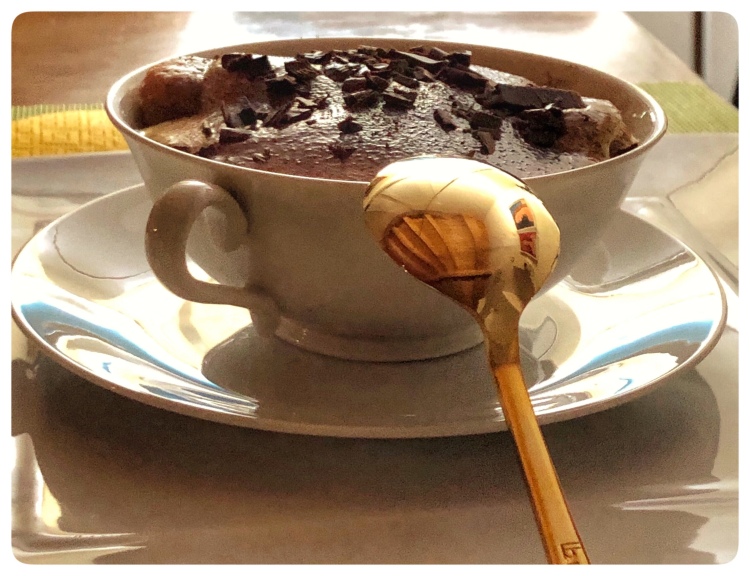 In a saucepan, mix the egg yolks with the sugar until the mixture is white and fluffy. Still stirring, add the Moscato, or Marsala, a little at a time.

Place on the heat and cook in a bain-marie, over a very low heat, continuing to stir without boiling until the mixture begins to mount.

Eggnog is served in a hot or cold cup with dry biscuits. Or it is used as a sauce to accompany a dessert, the Tiramisú in fact!

For the tiramisu cream, work the mascarpone with the zabaglione until you obtain a thick cream.

An option is also to use whipped cream too, about 100 g. It should be added to the mascarpone and zabaglione cream. Hence, whip the cream with the sugar, then mix it with the cream and transfer the mixture into a pastry bag.

I must say that I avoid this step as well, and I get perfectly good results too, with less calories, enough to feel a little less guilty! 😉

Soak the Ladyfingers biscuits with the coffee and place them on the bottom of a glass or cup. Continue with a layer of zabaglione cream. Repeat the process until all the ingredients are used up. Complete the dessert with a sprinkling of cocoa, raspberries and chocolate chips to taste. Serve immediately.

5 thoughts on “Tiramisú—Origins and Variations”