If you want to visit a Castle full of European history then Miramare Castle is for you. A 19th-century castle on the Gulf of Trieste near Trieste, in Northeastern Italy.

Ideal for those interested in experiencing full immersion in one European historical residences, which have preserved almost entirely their original furnishings that convey the charm of living in the middle of the Nineteenth century.

Miramare Castle and its park were built on a wish of Ferdinand Maximilian (1832–1867), of the House of Habsburg. Maximillian was the younger brother of Franz Joseph, Emperor of Austria.

In 1850, aged eighteen, Maximilian came to Trieste with his brother Charles and decided to move to Trieste and to have a home built facing the sea and surrounded by a park worthy of his name and rank.

Designed in 1856 by Carl Junker, an Austrian architect, the architectural structure of Miramare was finished in 1860. The style reflects the artistic interests of the Archduke, who was acquainted with the eclectic architectural styles of Austria, Germany, and England.

A SAD ENDING and (of course) a curse

Maximilian intended to create an intimate atmosphere in the castle in the area reserved for his family – an area which he wanted to be in contact with nature, reflecting both his own spirit and that of an epoch.

The work, steadily supervised by Maximilian, was finished only after his departure in 1864 for Mexico; where after a brief reign as Emperor he was executed in June 1867. 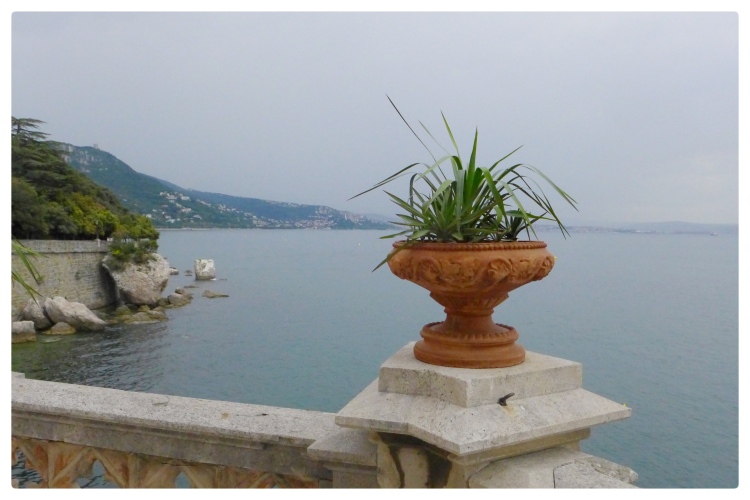 Maximilian gave in to political pressures, and reluctantly accepted an offer by Napoleon III of France to rule Mexico, conditional on a national plebiscite in his favor. Once in Mexico matters worsened for Maximilian particularly after French armies withdrew from Mexico in 1866. His self-declared empire collapsed, and he was captured and executed by the Mexican government, which then restored the Mexican Republic.

His wife, Charlotte of Belgium, who had left for Europe earlier to try to build support for her husband’s regime, suffered an emotional collapse after his death and apparently became insane. 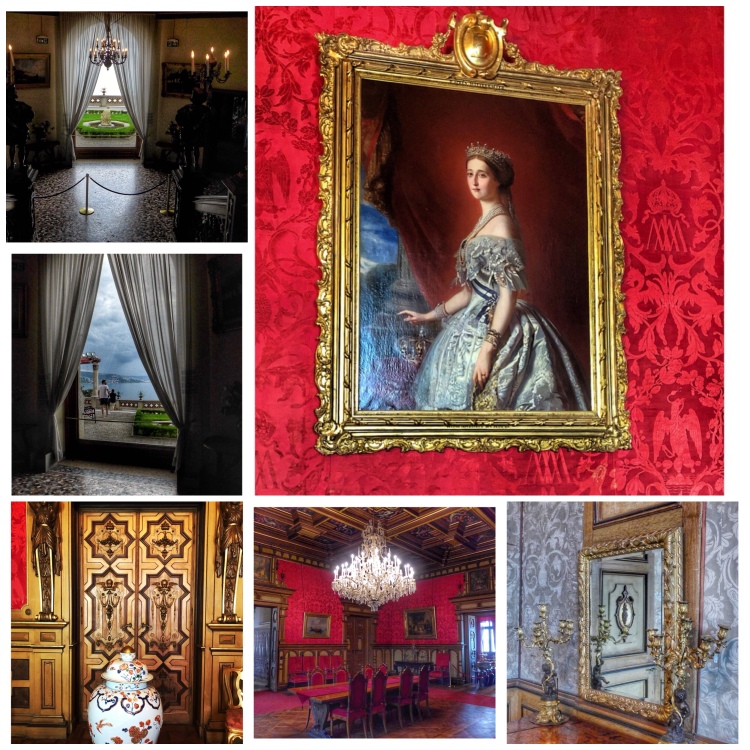 According to the legend, there is a curse linked to the castle of Miramare, according to which whoever spends the night there is destined to die prematurely in foreign land, probably because in 1914, the heir to the throne Archduke Franz Ferdinand lived in the castle with his wife and sons, two months later (28 June 1914), the archduke was assassinated at Sarajevo.

After the death of Maximilian, in Mexico in June 1867 and Charlotte’s departure for Belgium, the castle and the park continued to be a place where the Habsburgs spent short periods.

Eventually, the government assigned Miramare to Duke Amedeo of Aosta, captain of the first air division stationed in Gorizia, who lived there continuously till 1937 when he was appointed viceroy of Ethiopia. The castle was also inhabited off and on by the Duke’s family until the middle of 1943. It is interesting to see the 1930s-style furniture that belonged to the Duke’s family. 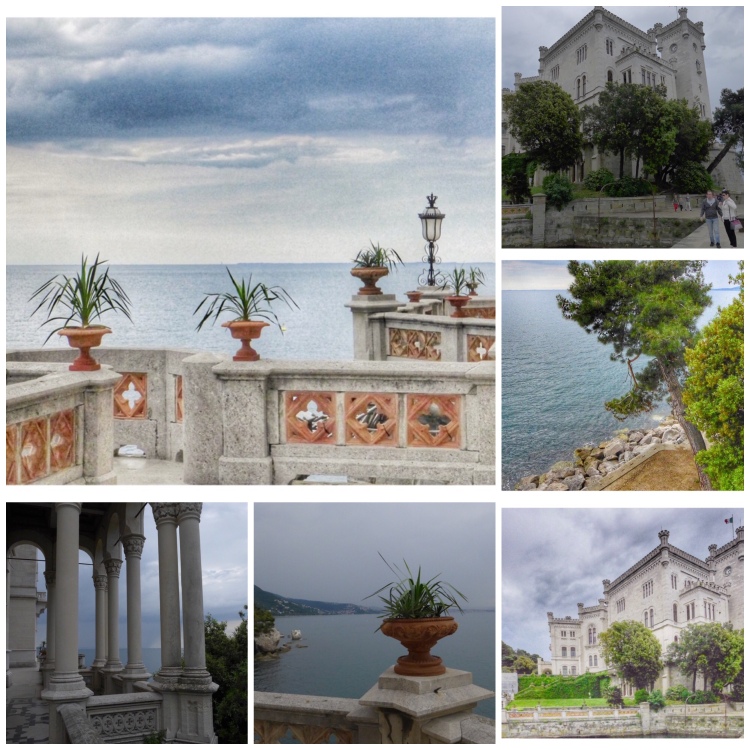 Despite the sad stories above, the Castle is beautiful, in a lovely setting, and the interior is also very nice and makes a lovely visit full of history.

On the ground floor, destined for the use of Maximilian and his wife, Charlotte of Belgium, worthy of note are the bedroom and the Archduke’s office; the library, whose walls are lined with bookshelves and the rooms of the Archduchess with their tapestry of light-blue silk.

All the rooms still feature the original furnishings, ornaments, furniture and objects dating back to the middle of the 19th century.

The first floor includes guest reception areas and the Throne Room, which poor Maximilian never even saw, never mind sitting on it! Maximilian’s bed, a wedding gift from Pope Pius IX, was never slept in.

I loved it that from almost every room you could see the sea from the windows.

Numerous interesting portraits can be admired on the walls. See Ludwig II of Bavaria, also known as “The Mad King” (although not a Targaryen 😉🙂), a von Wittelsbach instead, who also had the habit to marry among close relatives. 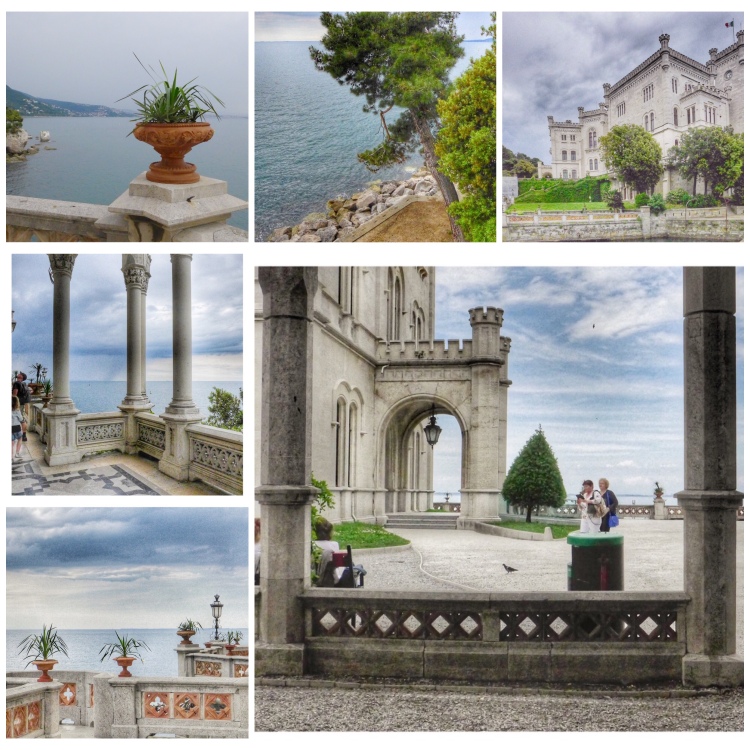 We can see also the portrait of Maria Teresa of Habsburg, mother of 16 children, among which the sadly famous Marie Antoinette of Queen France.

Already in September 1882 Emperor Franz Joseph with Elizabeth of Austria and the heir to the throne Rudolf with his consort Stéphanie of Belgium stayed in Miramare during an official visit to Trieste and gave receptions for the notables of the city. In August 1885 the Archduchess Stéphanie stayed there for a few days. Between 1869 and 1896, Empress Elizabeth is recorded as having stayed there on at least fourteen occasions. From March 9 to April 11, 1914, the heir to the throne Archduke Franz Ferdinand lived in the castle with his wife and sons and gave hospitality to the German Emperor William; two months later the archduke was assassinated at Sarajevo. Worthy of note is also the visit of the last Emperor of Austria Karl Franz von Habsburg-Lothringen-Este, and his wife Zita Borbone-Parma. 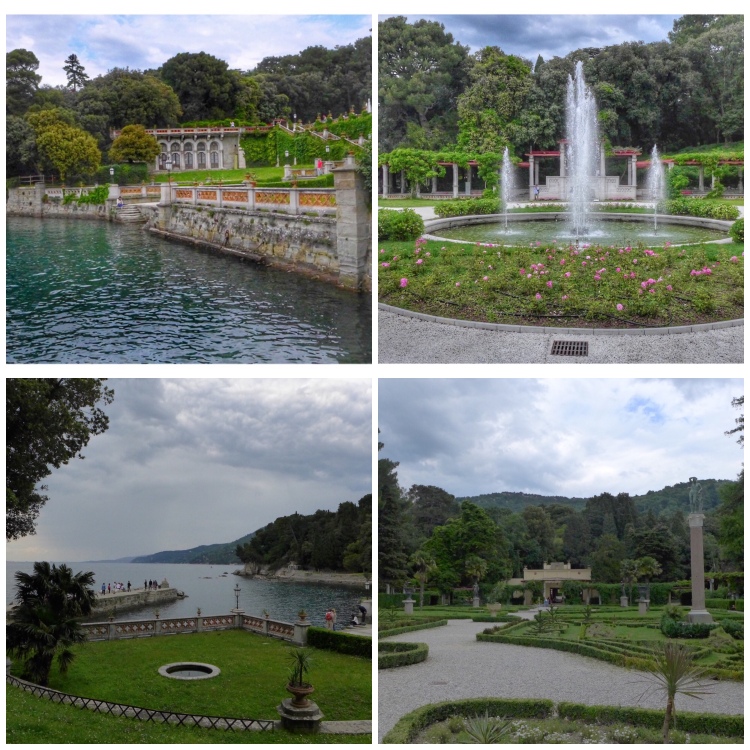 Miramare Park has about 54 acres of land on a rocky promontory overlooking the Adriatic Sea. It was intended as a private garden and not as a park. In fact, it does not have a monumental entrance or a driveway up to the castle. It was a garden of wonders, not intended for public use, even though the archduke opened it to the public a few days per week. Watercourses, pools, twisting paths, trees placed according to natural models, some grassy areas, are typical of English gardens. The roughness of the ground favored the irregular layout of the promontory, combining the artificial transformation with the natural environment.