Game of Throne is over but everybody is still talking about it, and not necessarily in a positive way. Many are disappointed at what seemed a quick ending just to get it over with.

And Yes! Me too

George R.R. Martin used a lot of his knowledge of British and European history to write ”A Song of Ice and Fire.”

Clearly, GRRM went through history books to build a series of novels about international politics and the ”struggle for power, ” taking different parts of European history to construct plausible arguments about the processes of politics.

Watching GoT we could recollect moments in long gone history, tales of the past learned in Grammar school, and depictions of historical events from great artists of the past.

The dragons of Daenerys grew and rose to the role of great protagonists in the last season.  Their representation seems to be based on images of dragons found in so many medieval books that collected descriptions of all animals, real or fantasy.  It was not unusual to find dragons depicted as a large flying reptile, equipped with a crest and wings, capable of spitting fire. In the Christian Middle Ages, the dragon had a negative value, as a symbol of the devil, while it has positive meanings (as a symbol of value and fidelity) in north European heraldry. Dragons are found in religion as well.  A famous painting Saint George and the dragon by Raffaello Sanzio can be seen at the National Gallery of Art in Washington. 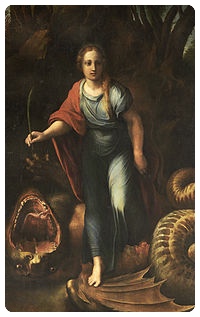 But the most interesting is Saint Margareth of Antiochia, in fact the image of the young queen of dragons recalls many medieval and Renaissance representations of Margareth of Antiochia, the saint who would have tamed a dragon simply by praying: in several paintings the dragon appears small, and in some cases on the shoulder, as in the famous scene of GoT.

The women of GoT are all coming out of the Pre-Raphaelite art, from young innocent Sansa to manipulative Cersei. 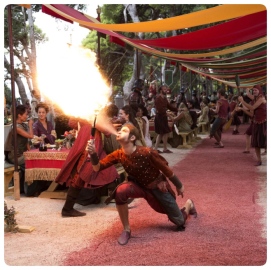 There are similarities between the wedding scene between Joffrey Baratheon and Margaery Tyrell and the famous painting depicting the Wedding of Nastagio Degli Onesti by Sandro Botticelli.  A lot of the shots, choices of objects, clothes of the participants are pretty similar to the famous painting.

The Titan of Braavos is the Colossus of Rhodes

Another famous image of the series is that of the Titan of Braavos, a large statue that constitutes the entrance to the lagoon where the city of Braavos is located, the largest of the nine “Free Cities”.  One hundred and twenty meters high, the statue, in stone and bronze, rests on two islands.  The statue, which we see in the second season, is clearly inspired by the depictions of the Colossus of Rhodes, the huge statue of the God Helios, probably located in the port of Rhodes in Greece in the 3rd century BC It is one of the so-called seven wonders of the ancient world.

Joan of Arc and Brienne of Tarth

There is a clear visual similarity between Brienne and Jian of Arc. “The Maid of Orléans” claimed to have received divine visions instructing her to support Charles VII and recover France from English domination late in the Hundred Years’ War. The uncrowned King Charles VII sent Joan to the siege of Orléans as part of a relief army. 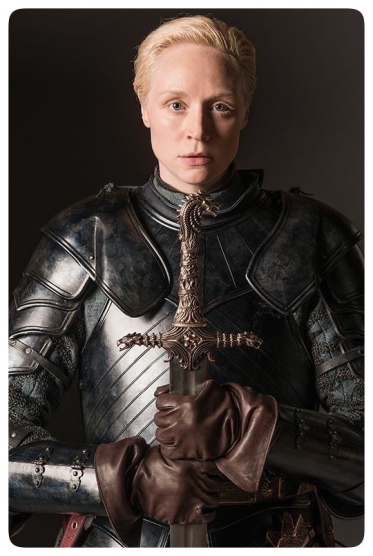 Arya sets sail to discover what lies west of Westeros, just like a young Colombo set sail to the Indies, cape and attitude, plus her own ship—courtesy of the Queen of the North.

Yalta Conference and the Choice of ”Bran the Broken”

As at Yalta (we can see a Roosevelt also as “Broken”), where the aim of the conference was to shape a post-war peace that represented not just a collective security order but a plan to give self-determination to the liberated peoples of post-Nazi Europe; the leaders of the Seven Kingdoms met to shape the post-Dracarys peace. However, within a few short years, with the Cold War dividing the continent, Yalta became a subject of intense controversy. As we see the new ”Council” with Bronn The Sellsword as Minister of Finance & Head of the FED, we are left to wonder what has changed from before. 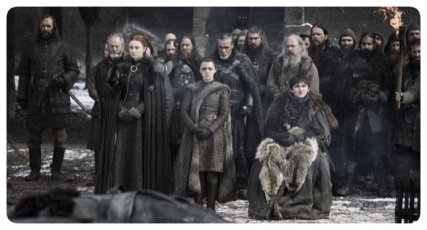 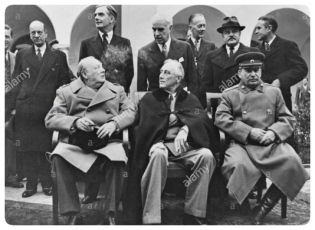 Martin also created complex characters that grew–for good of worst–thru the years, according to their adversities and adventures. The characters grew not just in age, but acquired dept and complexity. He gave us favorite characters to cheer for, or loathsome to despise.

Unfortunately, the last season flattened most, if not all characters; situations were dismissed way too quickly, and many loose ends were left untied.

Knowing that Bran is able to interact with the past came to very little after all. Bran just sat there staring at people in a rather creepy way. What is the use of his past/future knowledge? Who hasn’t felt the thrills of the famous “hold the door” … and then?

The whole storyline of  White Walkers ended hastily and shamefully.  Eight seasons to tell us that White Walkers are coming, hinting who knows what horrible plans they had, and then close it like this?

The great twist of the dragon gone to the White Walkers in the end only served to break down part of the Wall?

What’s the big revelation about Jon Snow’s origins?  Knowing that he is a Targaryen hasn’t been useful to the story that much after all.

And how about the big winter that was coming as we heard for eight long years?

After Damaerys burned everything to a crisp (except her Hairdresser, Taylor, and manicurist!), I would have loved to see the leaders taking an active interest towards the burned to ashes populace or the few survivors. Who do they plan to rule?

All images are courtesy of HBO and Wikipedia