Soave as “Suave, Agreeable, Courtly, Sophisticated” that is this little town in the province of Verona, just between Verona and Vicenza.

Legend has it that it was Dante Alighieri, a guest at the Scaliger Castle to give the name “Soave” to the town by virtue of its delicious wine. More likely, the name of Soave derives from the distortion of the name of the Swabian tribes who settled there following King Alboin. The Swabians or Svevi in Italian dominated Italy for many years, I mentioned them briefly here, but there is much more to say about them.

In Latin the U and V were written both as V. Hence it is easy to go from Svevi… to Svuave, to Soave in modern times.

In the Middle Ages, the historic center of Soave reached its greatest splendor. The town of Soave which extends from the first city walls is really very nice. Along the main road, we can see the beautiful Cathedral of San Lorenzo Martyr. The main façade is unmistakable of neoclassical style and Palladian style. 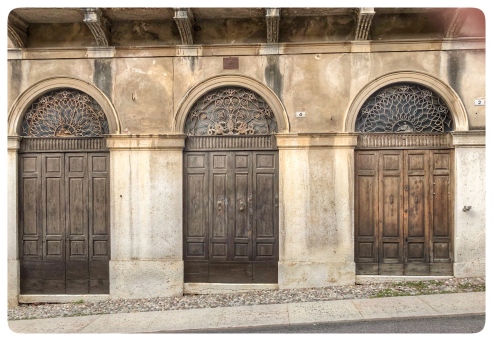 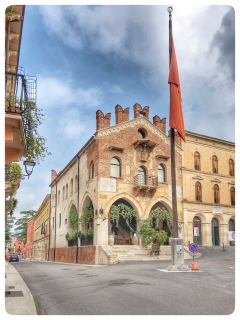 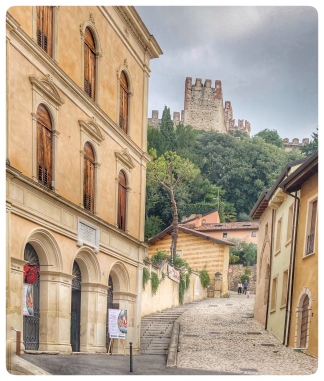 Also worth seeing is the 14th century Palazzo di Giustizia that stands in Piazza Antenna, the Palazzo Cavalli, erected in 1411 by the Captain of Soave, Nicolò Cavalli.

Next to the Palace of Justice begins the panoramic road that leads to the Scaliger Castle and allows you to have a complete view of the villages and surrounding areas, with the Lessini Hills, and wine crops.

The origins of the Castle, dates back to the beginning of the 10th century, when the King of Italy Berengario I decided to have the walls erected to counter the numerous raids of the Hungarians. 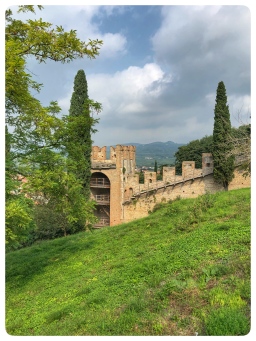 The Castle of Soave has always maintained a strategic and military connotation. It was never a noble residence but was managed by the Captain of the army of the Lords of Verona as a garrison for the control of the territory.

Eventually, Ezzelino III da Romano was installed as Captain at the Castle (not yet a Scaligeri Castle at that point). Ezzelino da Romano was not the most popular guy, in fact, he became infamous as a cruel tyrant, and was, in fact, the most “notorious” of the “early tyrants”. Dante takes his revenge but putting him in hell, but he was a good politician and was a close ally of the emperor Frederick II. On 22 May 1238, on Pentecost, in the Basilica of San Zeno in Verona, Ezzelino married Selvaggia, the natural daughter of Emperor Frederick II.  She dies very young, but not a concern at all for Ezzelino; he married quite a few (Zilia,  Selvaggia of Staufen, Isotta Lancia, Beatrice Maltraversi). 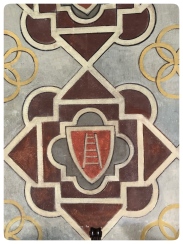 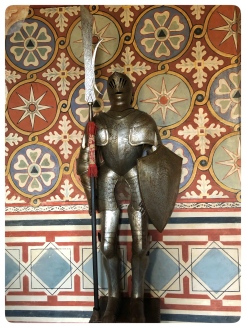 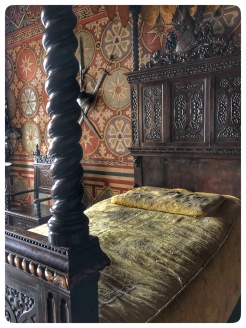 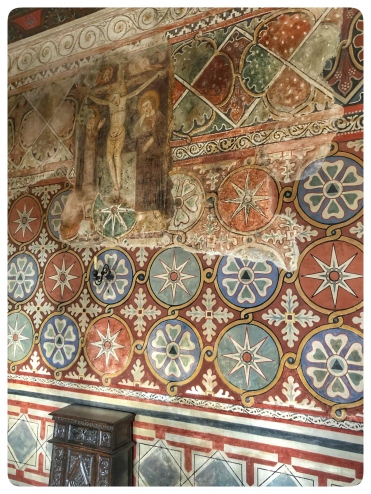 The sudden death of Frederick II, in 1250, politically weakened Ezzelino III, who certainly from this date became more suspicious and violent. Interesting is how Oscar Wilde describes Ezzelino in his “Portrait of Dorian Gray” (Chapter 11):

«Ezzelin, whose melancholy could be cured only by the spectacle of death, and who had a passion for red blood, as other men have for red wine–the son of the Fiend, as was reported, and one who had cheated his father at dice when gambling with him for his own soul;»

Between the 13th and 14th centuries, the Castle was run by the Cicogna family on behalf of the Signoria of the Della Scala family, lords of Verona. In 1375 Cansignorio Della Scala restored it and endowed it with the great walls that we can admire today and which surrounds the whole town. We can see a lot of signs and family crests of the Della Scala family (scala translate as ladder), and the symbol of the DOG, as the family members of Della Scala had always “dog-sounding” names, such as Cangrande (big dog), Mastino (mastiff), and Cansignorio (lord dog!).

The Castle is today privately owned, but very well kept. To visit prices are as follow:

The visit lasts about an hour and a half, but since it is completely autonomous it can last more or less depending on the time you decide to stop for photographs and to enjoy the splendid panorama (it took me well over an hour). The walk on the patrol walkway (battlements), is wonderful and ends on the highest main tower, called “Mastio” in Italian.

The lovely panorama opens onto a wide view of the historic center of Soave and the countryside rich in vineyards, where one of the best wines of the Veneto is produced: the Soave of course, a wonderful white wine, that moves away from the international style of Chardonnay or Sauvignon. It presents itself with a different richness, more integral and complex. 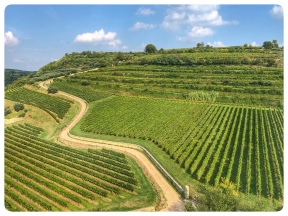 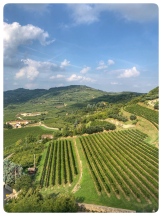 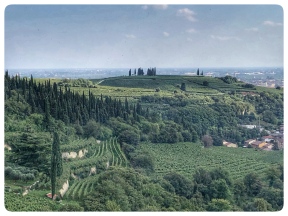 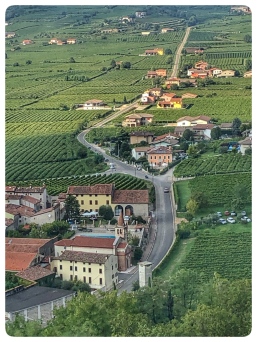 The Soave Wine Route corresponds to an ideal circular route, of about 50 kilometers, which winds through vineyards, churches, and castles. The road touches thirteen municipalities, interested in the Controlled Denomination of Origin and embraces the most appreciated wineries for the production of Soave. The Coffele Winery has both a store in Soave and just a few miles from Soave, near Verona, Tenuta Coffele is the perfect location for hosting a memorable event.

Among the local products, in addition to the wine grapes, we note the Monte Veronese cheese, the Vialone Nano rice, the oil, the cherries of the Veronese hills, the Verona radicchio. 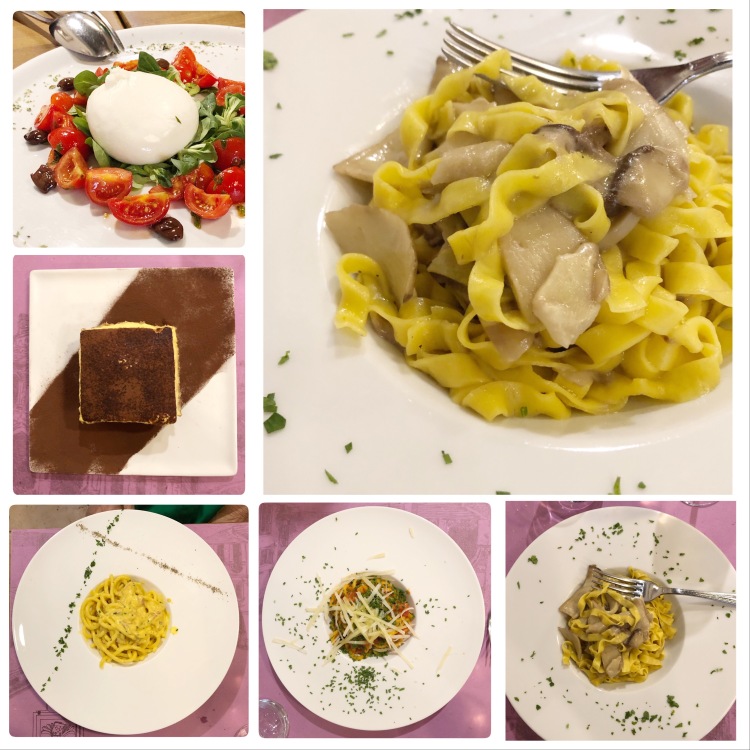 We stopped for lunch at this most beautiful restaurant Enoteca Il Drago, particularly beautiful if you get a table on the portico, with the view of the main Soave street. Of course, we had Soave to drink.