Vicenza—as I already wrote—is a beautiful city filled with Palazzi (see VICENZA NEEDS MORE THAN A DAY or VICENZA (PART II) THE VIEW FROM THE HILLS), sumptuous streets, and many villas in the immediate vicinity (see A WALKING TOUR IN VICENZA),

Thanks to Andrea Palladio who was a real busy man, Vicenza has a lot to offer, but the real jewel is the Teatro Olimpico, it is the wonder of Vicenza indeed!

The Teatro Olimpico is the first indoor theater in masonry in the world, with interiors made of wood, stucco, and plaster. It was constructed by architect Andrea Palladio, between 1580 and 1585, when it was inaugurated.

It is included in the UNESCO World Heritage List

Palladio was commissioned a permanent theatre by the Accademia Olimpica but was not completed until after his death. The design is an elliptical terraced auditorium, framed by a colonnade, with a frieze (1) topped by statues. In front of it is the rectangular stage and a majestic proscenium (2) with two orders of architecture, opened by three arcades and divided by half-columns inside which we find aedicules (3) and niches with statues and panels with bas-reliefs. 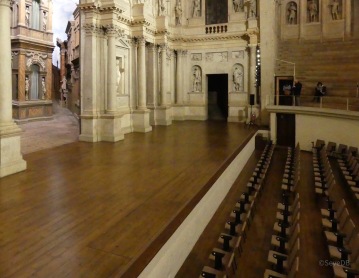 Palladio, after some traveling, returned to Vicenza in 1579, bringing with him a lifetime of detailed study into all aspects of Roman architecture, and a detailed understanding of the architecture of classical theatres. While visiting the Acropolis of Athens, I could not help it but notice the resemblance with the ruins of the theater (photos below) with the famous Palladio’s Teatro Olimpico! 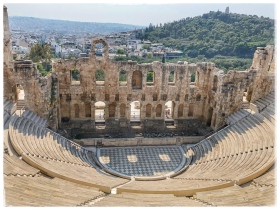 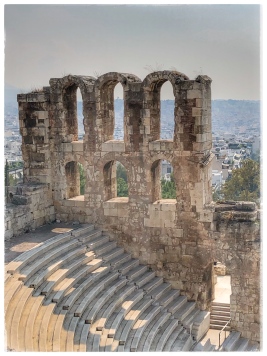 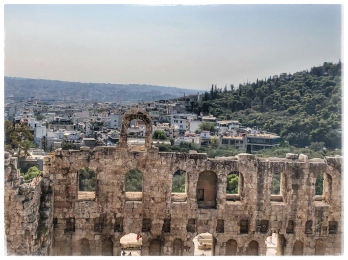 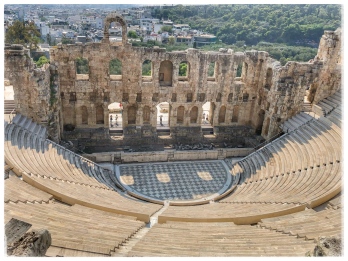 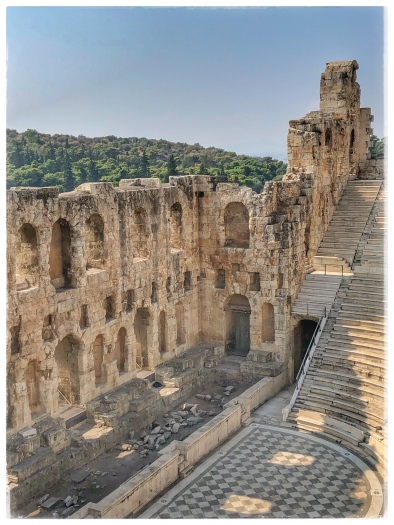 Palladio died in August 1580, only six months after construction had started on the theatre. Soon after the prominent Vicentine architect, Vincenzo Scamozzi was called upon to complete the project. The Trompe-l’œil onstage scenery was in fact designed by Vincenzo Scamozzi.

Isn’t it terrible to step into some famous big shoes?

However, Scamozzi really lived up to his great predecessor; he had already stepped in to complete Palladio’s other great unfinished project, the villa just east of Vicenza that is today known as La Rotonda. It is a mark of Scamozzi’s genius that both these projects are today regarded as being among Palladio’s most successfully executed works. 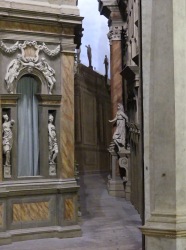 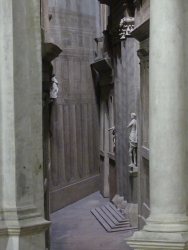 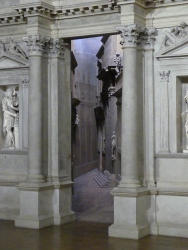 There is no other theater in the world like it

Scamozzi’s most famous and most original contribution to the theatre was his elaborate stage set, with its remarkable trompe l’œil street views. He not only designed the sets, but also put considerable effort into designing the lighting that permitted the make-believe houses of the stage scenery to be lit from within, completing the illusion that these were real streets, and to give the appearance of long streets receding to a distant horizon. It was installed in 1585 for the very first performance held in the theatre and is the oldest surviving stage set still in existence. 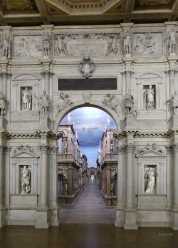 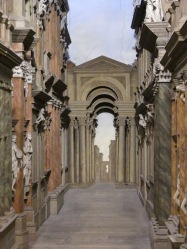 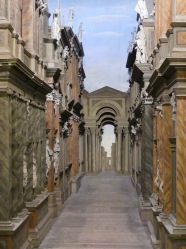 Palladio can be given credit for having inspired the remarkable perspectives which are visible to the audience through the central archway of the front scene (here called “porta reggia“). But credit should be given to Scamozzi as a technical genius behind this remarkably successful building.

A visit to Teatro Olimpico is a unique experience

Teatro Olimpico is still used for plays and musical performances, but audience sizes are limited to 400 seats, for conservation reasons. Performances take place in two theatre seasons—classical plays in the autumn and the festival “Il Suono dell’ Olimpico” in the spring. It is not equipped with heating or air conditioning, which could damage the delicate wooden structures. Take a shawl if you plan to attend a performance there, even in summer!

Moreover, the nearby Bacchiglione river that flows through Vicenza and Padua, which rises in the Alps and empties about 90 miles (140 km), occasionally overflows in Vicenza and therefore putting the nearby Teatro Olimpico in danger of being flooded. 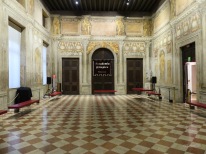 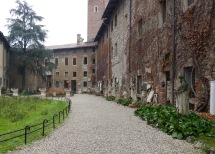 (3) a small building; a small construction, as a shrine, designed in the form of a building.