Welcome to Castell’Arquato beautiful medieval village and listed on the “Most Beautiful Villages in Italy” list!

Castell’Arquato is strategically located on the first hills of the Val D’Arda, and it is perched along the hillside dominating the view.  Just about thirty kilometers (or 18 miles), from Piacenza and a just a bit more from Parma. 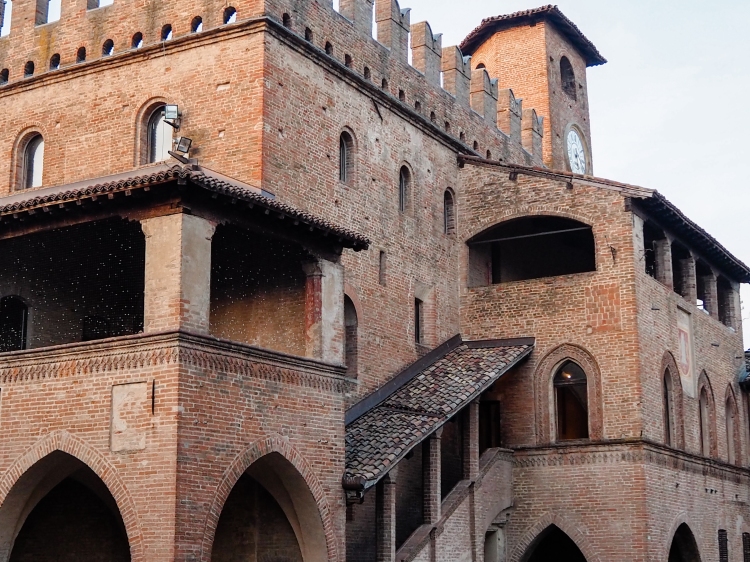 The village—built in medieval times—has not undergone any noteworthy changes over the years.  It is a village where culture, history, naturalistic riches, and gastronomy come together in perfect harmony.

A walk in Castell’Arquato will allow you to admire different and splendid monuments.  Starting from the lower town, the imposing Torrione Farnesiano can be seeing.  Next to it stands the Palazzo del Duca with the homonymous fountain.  Continuing the climb and taking the street called “Solata“, the majestic Rocca Viscontea appears.  Once in front of the Rocca, one is enchanted by the Monumental Square in which the three powers of the Middle Ages are represented: religious power (the Collegiate), military power (the Rocca), political power (the Palazzo del Podestà).

The Registrum Magnum of Piacenza sets the beginning of construction of this village at 1342, in full domination of Luchino Visconti (not the Italian film director, but his ancestor!).  The fortress stands on the foundations of the Roman castrum quadratum (3rd century BC), rebuilt and adapted several times since the time of the Gallic invasions.  The complex was completed in 1349.

The highest tower was an important observation point between the Po Valley with Milan and the slopes of the Apennines that lead to the sea.  In the fourteenth century, nothing and nobody could escape the eye of those who peered towards the valley below from the top of the Rocca!

The main entrance thru a bridge, that was once a drawbridge, at the base of the great keep. The keep contains overlapping rooms, connected to each other by a staircase partly in wood and partly in masonry that leads to the top from which the visitor can enjoy a fantastic and unparalleled panorama that goes from the Po valley to the Alps in the north, up to the Apennine ridge to the south, towards the sea. 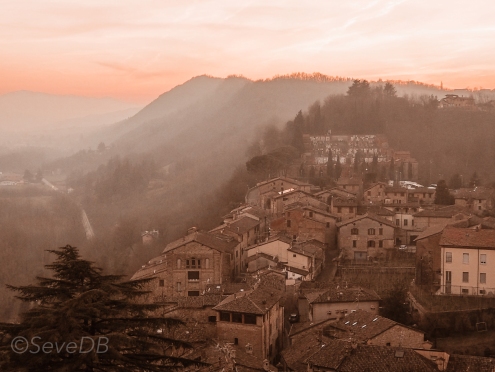 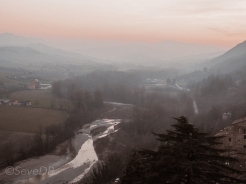 The fortress was built for military purposes and in more recent times it was also a prison.

This simple but beautiful church is worth a look.  Built in sandstone, there are many shells visible on the facade as the testimony of where the sea used to be once upon a time. They shine on the afternoon sun, quite beautiful indeed.

Collegiata church of St Mary, dating to the late 8th century, when it was a baptismal pieve. It was, however, completely rebuilt after an earthquake in 1117. Notable is the Romanesque “Paradise Portico” on the left side, dating to the late 14th century, the four apses and the late 13th-century cloister. The interior has sculpted capitals and sculptures from the 12th century and frescoes.

For lunch, it is worth stopping at Azienda Agrituristica Battibue, in Fiorenzuola d’Arda. A nice stop and an occasion to have a glimpse of farmers’ life back in the days. 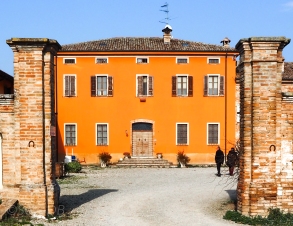 It is worth a stop to see this beautiful Abbey. Entering via the thirteenth-century door you immediately grasp the Latin cross plan, arranged on three naves with a cross vault, supported by small terracotta pillars on the sides, and with a flat apse.  The main body is made up of four spans, while a smaller fifth forms the presbytery.  The arms of the transept consist of two rectangular spans, while the cross is deformed by the dome of the tower.

The Most Beautiful Cloister

This thirteenth-century cloister is embellished by the Enthroned Virgin with Child honored by Cistercians (first half of the sixteenth century).  Note the “knotted” columns located on the north-west side that indicate the union between heaven and earth and the simplicity of the capitals of the other columns, decorated with leaves, eagles and human faces. 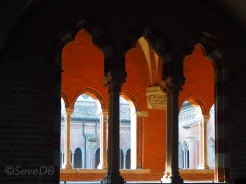 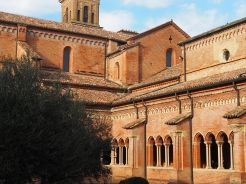 Perhaps it is also worth a visit to the Fidenza Village Outlets. Just halfway between Parma and Piacenza. they offer prestigious luxury brands including D&G, DKNY, PRADA, Gucci, Puma, Nike, Moncler, Monnalisa and many others.

In addition, there are company shops of the great yarn and clothing companies with prestigious women’s clothes and suits for men in pure cashmere.

5 thoughts on “A “Most Beautiful” Castell’Arquato”